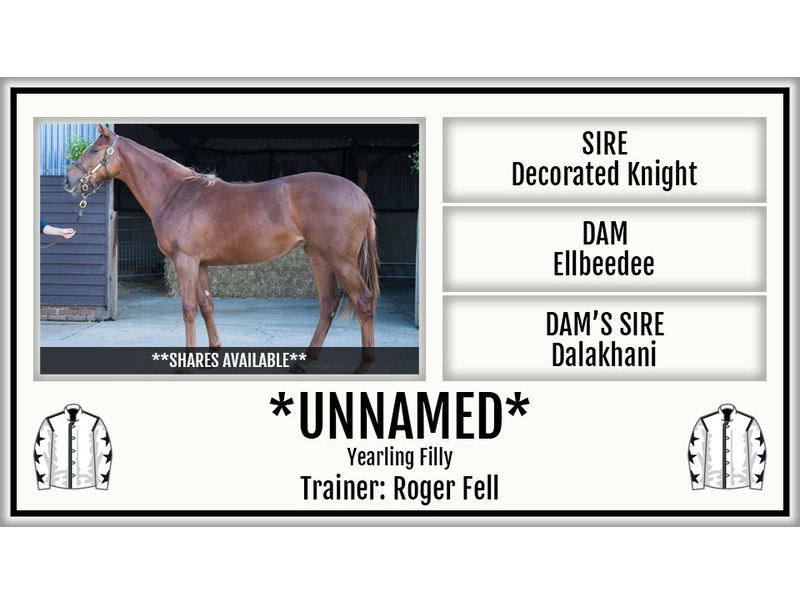 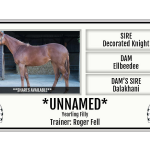 NICK BRADLEY RACING is delighted to offer shares in this lovely yearling filly by DECORATED KNIGHT out of winning, ELLBEEDEE.

This filly was purchased by Nick Bradley from Tattersalls Book 3 yearling sales for 28,000 Guineas.

She is an attractive, good moving daughter of first season sire Decorated Knight. She was born in late April which means she is one of the more immature yearlings compared to those who were born in January and February. This shouldn’t be relevant as she is bred to be one for the second half of the 2021 season rather than the sprinting trips in the first half of the season.

She is by Decorated Knight who debuted as a 2yo over 8 furlongs and won at trips between 8 and 11 furlongs. The dam has already produced Stakes performer Bourenmouth Belle who was Listed placed at 2.

She seems a very straightforward filly and one of the nicest fillies Nick has seen by her sire at the sales.

She is bred on the same cross as US Army Ranger who was the second placed horse in the 2016 Epsom Derby being a son of Galileo out of a Dalakhani mare. We expect stamina to very much be this filly’s forte and think she will be debuting over 7 furlongs and then progressing from run to run and running over 8 furlongs plus to be seen at her best.

Nick felt this filly was perfect for the training methods of Roger Fell as Roger brings his 2yos along gradually and they progress hugely from run to run and are still progressing after they have been seen on the track half a dozen times.

Roger has had three 2yos in training in 2020, each of them have won and include York winner The Flying Ginge and our own Pockley who is now rated 75 and will win more races on the all weather this winter.